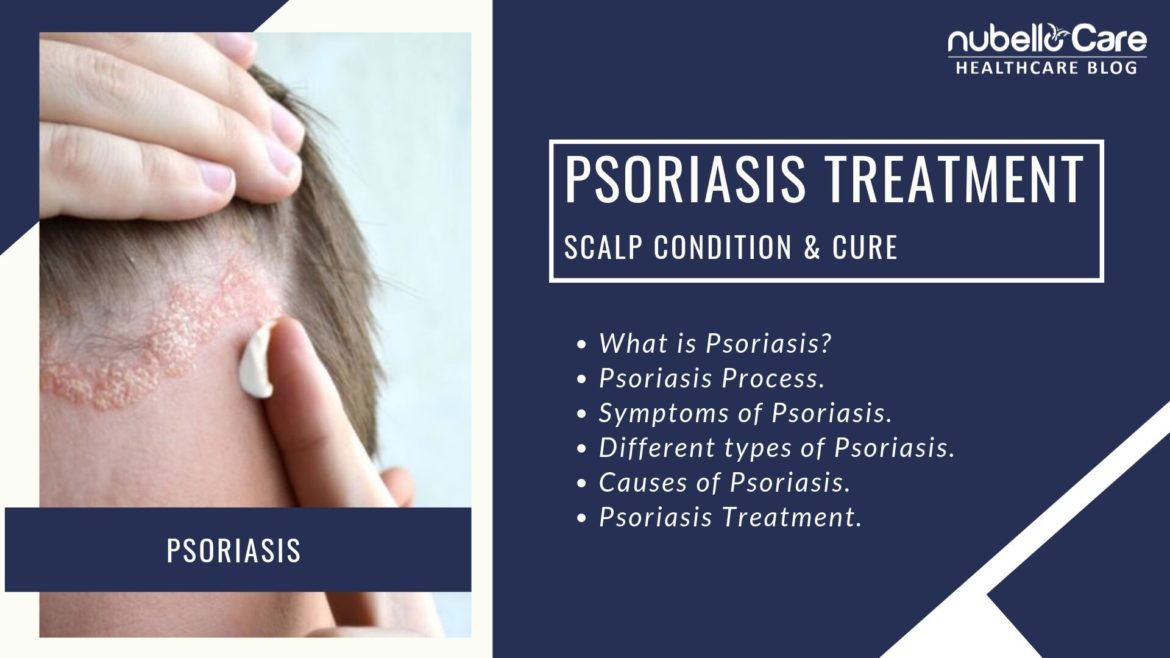 Psoriasis is a chronic autoimmune skin condition that causes rapid skin cells buildup. The skin cell buildup causes scaling on the skin. The common symptoms include flaking, inflammation, and thick, white, silver, or red patches of skin. Psoriasis treatments include steroid creams, occlusion, light therapy and oral medications, such as biologics. This article is all about Psoriasis, its type, symptoms, causes and Psoriasis treatment in detail.

In Psoriasis, skin inflammation and redness is fairly common. The psoriatic scales are typically whitish-silver and develop in thick, red patches and sometimes, these patches crack and bleed. The rapid skin production process causes Psoriasis.

The skin cells grow deep in the skin and slowly rise to the surface and eventually fall off. The typical life cycle of a skin cell is one month. In psoriasis, this skin cell production process occurs in a few days. The skin cells don’t have time to fall off and thus this rapid overproduction leads to the buildup of skin. Typically psoriasis affects knees, scalp, elbows, palms, soles, and torso the most.

Psoriasis symptoms vary with the types and from person to person. The symptoms of psoriasis can be as small as a few flakes on the scalp or elbow or can be extreme and cover the majority of the body. The skin production cycle might differ in person and thus not every person will experience all of these symptoms.

The most common symptoms of plaque psoriasis include:

Most people with psoriasis go through a set of symptoms cycles. The condition may cause severe symptoms for a few days or weeks, and then the symptoms may clear up and be almost unnoticeable. Then, in a few weeks or if made worse by a common psoriasis trigger, the condition may flare up again. Sometimes, symptoms of psoriasis disappear completely.

There are 5 types of Psoriasis.

Experts and researchers are unclear on what causes psoriasis. However, the general idea for the causes is one of two key factors: genetics and the immune system. There is a set of external factors that trigger psoriasis.

With the inheritance of genetics are more likely to develop psoriasis. An immediate family member with the skin condition can risk in developing psoriasis. However, the percentage of people who have psoriasis and a genetic predisposition is small.

Stress: High stress may trigger a psoriasis flare-up. If you learn to reduce and manage your stress, you can reduce and possibly prevent flare-ups.

Injury: An accident, cut, or scrape may trigger the psoriasis flare-up. Shots, vaccines, and sunburns can also trigger a new outbreak.

Infection: In case of sickness or battling an infection, the immune system overdrive, and fight infections. Thus start another psoriasis flare-up.

Psoriasis has no cure. Treatments aim to reduce inflammation and scales, slow the growth of skin cells, and remove plaques. Diet recommendations, change in lifestyle, and medications like – Biologics, Retinoids, Cyclosporine, and Methotrexate are the basic psoriasis treatment.

Visit Nubello Aesthetics and get a free consultation today on Psoriasis treatment.